How do you change the default currency?

You can do this from your store's Shopify admin. Scroll to the bottom of the page and look for Store Currency, then click Change Formatting.

Customers use this currency to buy your products. It can only be changed before you've made your first sale. If you've already made your first sale, you need to contact Shopify's support if you want to change your currency, but you should know there's a chance they won't approve your request.

You should make sure you also customize the same setting for the various payment providers you're using. Having your store currency set to USD while getting payments via PayPal in EUR might generate unwanted conflicts.

Why is the name of my default currency not shown?

The price on your store will not display by default the name of the default currency (store's currency), even if the format from Shopify contains the currency name.

For example, in this store, the currency format in the Shopify settings is the following (standard): 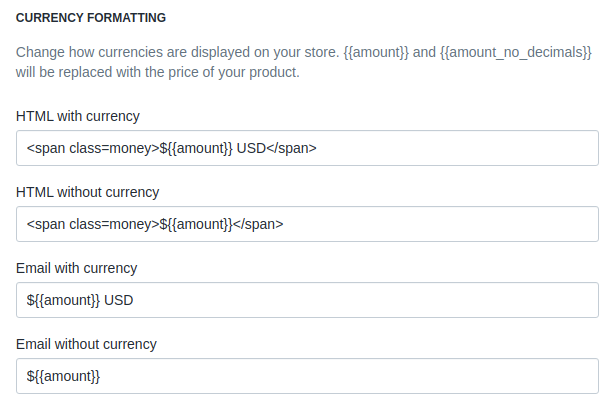 However, the price does not display the currency name (USD) on the store but only displays the symbol ($).

If you want the name of the default currency on your store to be displayed, then the HTML without currency field will also need to contain the currency name, such as in the example below: 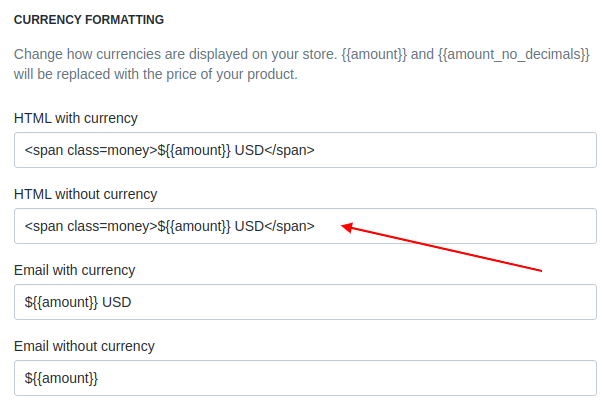 This way, the default currency will also contain the name:

The Currency Converter app will display the currency's name for any other currencies where the price is converted, except when the store uses Shopify's Multi-Currency.

Did this answer your question? Thanks for the feedback There was a problem submitting your feedback. Please try again later.
Last updated on August 18, 2021