I see this banner, what does it mean?

If you've come across the warning banner from the image below, it means that you have translations in some languages that are not Published in Vitals. 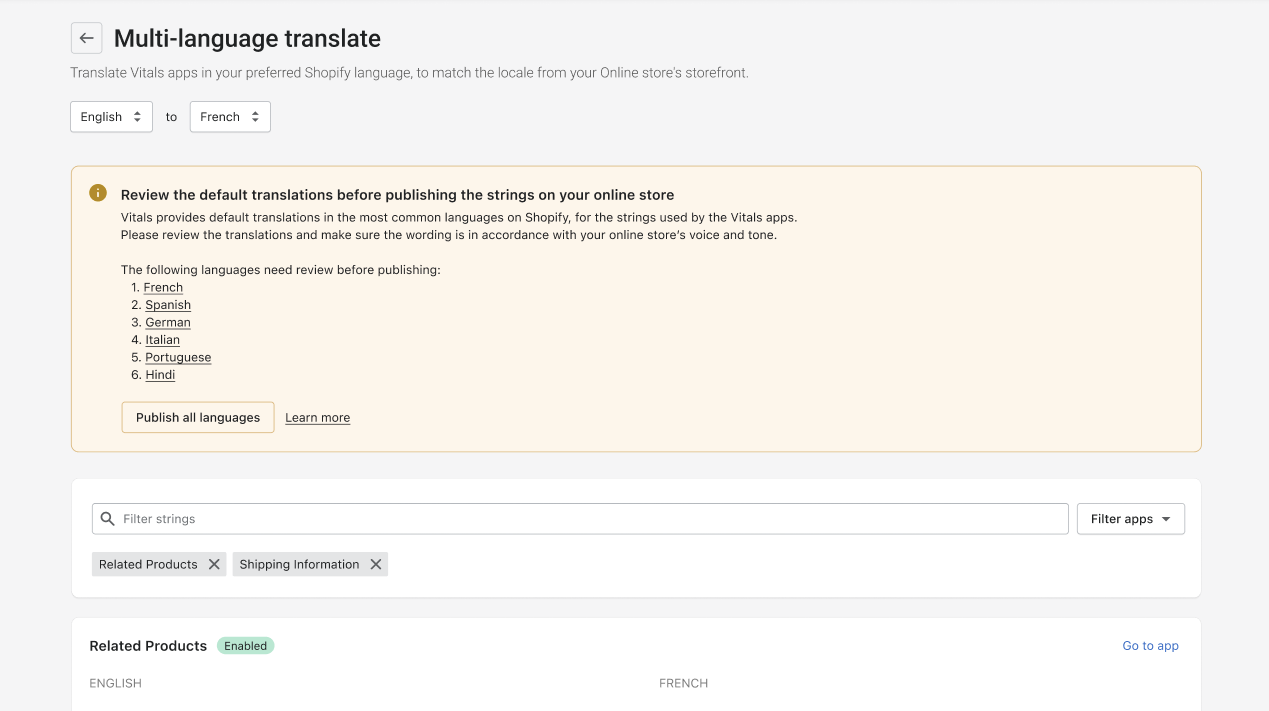 What should I do?

First, you should click on the first language listed. This will show you the translations for the selected language.
Next, make sure the translations are according to your store's voice and tone. If you have customizations on your Primary language, you may want to customize the strings in other languages as well.

Note that the default strings are  professionally translated and proof read in all languages.

Be sure to save before moving to the next language. Repeat step two for all the remaining languages from the list. Once all translations are perfect, click the Publish all languages button.

In Shopify, when you first add a new language from the Languages Settings, the language will not be Published. This is to allow merchants to review the translations and adapt them accordingly to the Store's preferred voice and tone. Finally, once the merchant is satisfied, he can then choose to Publish the language, so it appears on the storefront.

For the same reason, Vitals will not Publish automatically the new translations, without your explicit approval.

Let's take, for example, a situation where you customized the string "gift" to "free toy". With the rollout of the Multi-language feature in Vitals, we added defaults for the most used languages (see this article for more details). So, at the moment of the feature rollout, you have the string "free toy" for your Primary language, but for the secondary locales, you will have our default translations for "gift". You may not want to use the translation for "gift", and with the Publish functionality we allow you to review and translate accordingly the custom strings.

If I click Publish all languages, will the immediately appear in the Storefront of my store?

Yes, if the language is already published in the Shopify Admin.

No, if the language is not yet published in the Shopify Admin.

Bear in mind that, in the banner, you may notice languages that are not published in Shopify.
This is intended, so you can edit the translations accordingly, before publishing the language in Shopify.

Did this answer your question? Thanks for the feedback There was a problem submitting your feedback. Please try again later.
Last updated on April 19, 2022